Indirect negotiations between Israel and Hamas for a prisoner swap are being held up by political uncertainty in the Jewish state, an unnamed defense official told Walla News on Friday.

The official told the news site that the Egyptian-mediated talks “have not stopped,” but the potential change of government is causing them to fall behind schedule.

The defense source added that Israel continues to insist that it will not release any convicted murderer of Israelis in exchange for the prisoners. He said Egypt understands the Israeli position linking the rehabilitation of the Gaza Strip following last month’s conflict with the return of captured Israelis.

On Monday, Hamas leader in Gaza Yahya Sinwar said Hamas was ready for “immediate negotiations” to achieve a prisoner exchange.

Sinwar made the comment following a meeting with Egyptian intelligence chief Abbas Kamel. The top Egyptian spy visited the coastal enclave after a series of meetings in Tel Aviv and Ramallah with senior Israeli and Palestinian officials.

Israel and Hamas conclude 11 days of fighting earlier this month during which the terrorist group launched thousands of rockets at Israeli towns and villages, and Israel launched hundreds of airstrikes in the Gaza Strip.

The last major exchange of prisoners between Israel and Hamas took place in 2011. In a controversial move, Prime Minister Benjamin Netanyahu authorized the release of 1,027 Palestinian security prisoners in exchange for captive soldier Gilad Shalit. 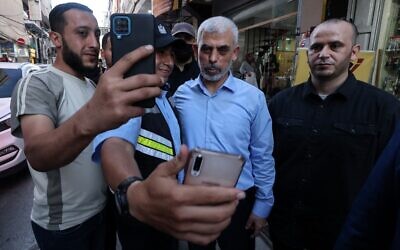 Yahya Sinwar, leader of the Hamas terror group in Gaza, poses for a “selfie” with supporters as he visits the Al-Rimal neighborhood in Gaza City on May 26, 2021, to assess the damage caused during the recent fighting against Israel. (Mohammed Abed / AFP)

It is not known how many prisoners Hamas will demand in return for the two living Israelis and the two bodies. After Sinwar’s meeting with Kamel, the Hamas leader cryptically told reporters to “write the number 1111”.

“You will remember it well [in the future]”Sinwar said. 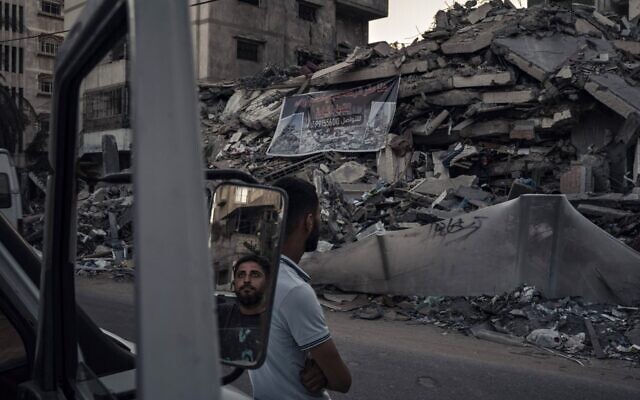 Palestinians look at the rubble of a building that collapsed after being hit by airstrikes during an 11-day war between Hamas leaders in Gaza and Israel in Gaza City on Tuesday, June 1 2021. (AP Photo / Felipe Dana)

Hamas has always said it rejects the link between the reconstruction of Gaza after the recent hostilities and an agreement with Israel on the captives.

“We will not allow the prisoners’ case to be linked to reconstruction, or to the siege, or to Palestinian rights. Our brothers in Egypt understand this, ”senior Hamas official Khalil al-Hayya, who is Sinwar’s deputy in the Gaza Strip, said on Monday.

Al-Hayya accused Israel of “delaying” a possible ceasefire agreement by not accepting the terms of the terrorist group.

“The Israeli occupation is not serious at this point. If they were serious, they could have moved on. We are not the ones who hold on [the issue]Al-Hayya said. 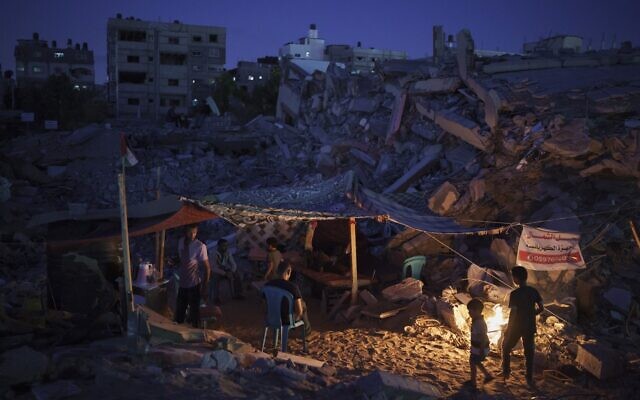 Palestinians sit inside a makeshift tent built among the rubble of their home, destroyed by an airstrike in Beit Lahia, northern Gaza Strip, on Friday, June 4, 2021. A truce that has brought about ended an 11-day war between Hamas’ leaders in Gaza and Israel has held so far so far, but it has failed to address any of the deeper issues plaguing the Israeli-Palestinian conflict. (AP Photo / Felipe Dana)

While an Egyptian-brokered ceasefire ended the fighting between Israel and Hamas, the truce remains tenuous. None of the underlying problems that Hamas invokes in attacking Israel have been resolved.

Egypt has reportedly invited Israel, Hamas and the Palestinian Authority to talks in Cairo on a long-term ceasefire. Foreign Minister Gabi Ashkenazi visited the Egyptian capital on Sunday.

Aaron Boxerman contributed to this report.

I am proud to work at The Times of Israel

I’ll tell you the truth: life here in Israel is not always easy. But it is full of beauty and meaning.

I am proud to work at The Times of Israel alongside colleagues who put all their hearts into their work day in and day out, to capture the complexity of this extraordinary place.

I think our reporting sets an important tone of honesty and decency which is essential for understanding what is really going on in Israel. It takes a lot of time, commitment and hard work on the part of our team to achieve this.

Your support, by joining The Times of Israel community, allows us to continue our work. Would you like to join our community today?

Join the Times of Israel community

Already a member? Log in to no longer see this

Are you serious. We appreciate this!

We are really glad you read X Times of Israel Articles in the past month.

That’s why we come to work every day – to provide discerning readers like you with must-see coverage of Israel and the Jewish world.

So now we have a request. Unlike other media, we have not set up a paywall. But since the journalism we do is expensive, we invite readers for whom The Times of Israel has become important to help support our work by joining The Times of Israel community.

For as little as $ 6 per month, you can help support our quality journalism while benefiting from The Times of Israel WITHOUT ADVERTISING, as well as access to exclusive content reserved for members of the Times of Israel community.

Already a member? Log in to no longer see this